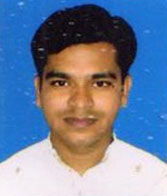 Though born to a farmer’s family, Rudra never wanted to be a farmer himself. His family and friends used to laugh at him back then. Now, he, has a good laugh at those memories. He holds these memories and these people very close to his heart. He believes they are what made him what he is today.

Rudra works as the general manager of the Baneshwarpur branch of IGCSM, in North 24 Paraganas. He loves what he does and is very emotional about his association with IGCSM. It definitely has been a long association. It after all started with him being a student here.

Rudra was very sure about one thing since he was very little - that he would never work as a farmer. All the generations that he knows of, in his family, had been farmers. And he believes that the financial instability that he had seen in his family, had been there in the family forever. He saw his parents sacrifice smallest things because they could not afford it. Sometimes these sacrifices would be asked of him, and sometimes of his brothers and sisters. There were a lot of compromises they all had to make. But what upset him the most is that his parents would be stressed all the time, argue over petty issues and every such episode would conclude in domestic violence.

He was therefore determined to do something that would take care of the financial instability of his family forever. Rudra, with all these hurdles, managed to complete his graduation. But could not find a job after that. People, his own family and friends, called him a dreamer and laughed at him. he was disheartened, but never gave up. He knew he had come to far to go back to where he had started. He genuinely believed he was too close to his dream of breaking loose the shackles of being a farmer’s son, to give it all up.

Rudra’s patience and determination finally paid off. He learned about IGCSM’s training centres and the courses offered there. He enrolled himself in the centre and completed an advanced level diploma in computer application. He was offered a job at the centre itself, which he did not refuse. He has been working there and his hard work has paid off well. His work has been recognised and he has slowly moved up to become the general manager of an IGCSM branch.

Rudra has, however, not stopped studying. He is now pursuing another course. He wants to become a trainer. He says, he will never give up studying; and that it is his dream to keep studying till his last breath. He laughs and calls himself a dreamer now.